The ‘belle époque’ during which Baronne de Wulf lived at the Château de Rolleboise was an interesting time for arts and letters. The Impressionists were making a name for  themselves although it was perhaps Monet and Renoir who were recognised in their lifetime. Then there was Art Nouveau. Toulouse-Lautrec simplified poster design Aubrey Beardsley was making a big commercial success with his unique black and white illustrations.  In architecture, both Frank Lloyd Wright in America and Walter Gropius in Germany were using clean modern lines to design buildings where function was more important than surface decoration. Remember also Rodin, Rousseau, Kandinsky and Munch. Perhaps the most long reaching influence was the invention of photography. The medium was now growing up and the stiff formal portraits of the 19 Century were being supplemented by pictorial subjects.  Bibi’s  father, Pierre Jacques De Wulf, was one of the first photographers. He is buried in the Cimetière de Mont Louis dit du Père Lachaise. Her brother was interred in the same cemetery. This period was a crossroads in the arts but did it divide or unite? 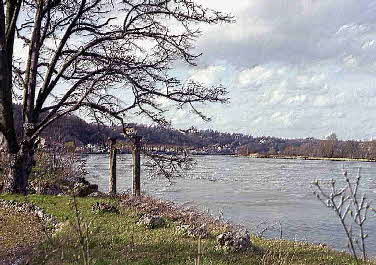 La Baronne was well known as a patron of the arts. The American painter Daniel Ridgway Knight made his home at Rolleboise and there are some photographs of him sitting in the château. Some of his wonderful paintings are on display at the Rehs Gallery in New York. The subject of some of his pictures is the Corniche de Rolleboise. What is interesting is the absence of the château on the skyline. This recent photograph positions the château exactly in the centre of this photograph and the village of Rolleboise together with its church which are still there as viewed by D Ridgway Knight. The château was built during the time that he was painting in the district.